Lulu was born in the United States into a family of musicians with Romanian and Moldovan Jewish, and French roots. She started learning violin from her father at the age of six, and stopped playing violin when she was ten. In 2005 she graduated from the University of California Santa Barbara with a BA in Fine Arts and French Literature. After finishing school, not having played violin for twelve years, she started to play Eastern European and Balkan folk music, traditional jazz, blues and country music on the streets of New Orleans. From then on, she played in numerous groups across the globe such as Tuba Skinny, Petrojvic Blasting Company, California Feetwarmers, Cyclown Circus, G-String Orchestra, Magnolia Beacon and Lovaskocsi Banda. Since 2008 she frequently travels to Romania where she has been learning folk music from the violinists Marcel Râmba, Gheorghe Anghel “Caliu”, Kodoba Florin, and Varga István “Kiscsipás”. Lulu started playing music with Johannes Olsson during her travels to Budapest in 2012, and in 2014 they formed Taraf de Akácfa.

Ilka is Hungarian and was born in Transylvania. She comes from a family of folk musicians and luthiers. From a young age she always wanted to sing, but it wasn’t until she moved to Budapest that she started her singing career. After finishing her masters degree in Civil Engineering, for three years she studied Jazz Vocals at Bartok Béla Conservatory and Liszt Ferenc Academy in Budapest. In addition to jazz, she has been actively singing Romanian and Hungarian folk music, while learning and discovering it at the same time. In 2016 she met the members of Taraf de Akácfa and began to collaborate musically with them, and soon after in 2017 she became Taraf de Akácfa’s first singer. 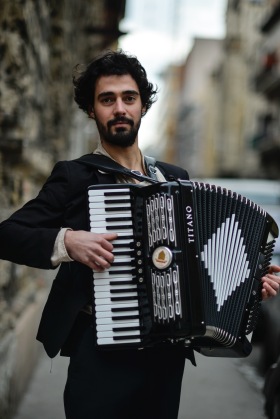 János was born in Szeged, Hungary. He grew up on a farm in Bordány where he went to elementary and middle school. At the age of six he started playing music on a traditional Hungarian instrument called citera. At eight years old he began to play the accordion and studied classical music at the Király-König Péter Zeneiskola in Szeged. During his high school years, he joined a ska band called Skatch. This band helped solidify his dream of being a professional musician. In 2011 he moved to Budapest to the Kőbányai Zenei Studio to study jazz and music theory on piano. After graduating in 2015, he became interested in folk music and went to a Hungarian folk music camp in Kalotaszentkirály, Romania. There he met an American musician named Kjartan, who introduced him to an international community of musicians in Budapest who played folk music and jazz. This community largely revolved around a collective house in Akácfa street, out of which many bands emerged. Jáncsi currently plays in two of these bands which were created in the Akácfa house; the Hét Hat Club and Taraf de Akácfa. 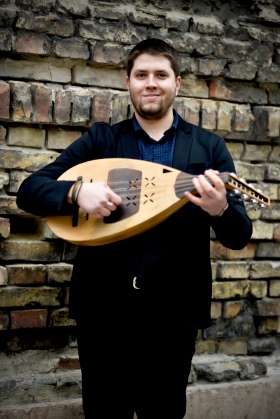 Bálint was born in Budapest, Hungary. He started learning classical music on flute and bassoon, and later taught himself to play guitar. Folk music came into Bálint’s life at the age of fourteen when he visited a Hungarian dance house. This was his first impression of Moldavian folk music, which later inspired him to start playing the cobza and visit old Romanian folk musicians to learn from them. In 2017 he received a degree in Social Education. Throughout his studies in the university, he was playing in numerous folk music bands such as; Servet, Tatros, Somos, Fanfara Complexa, Égvilág, and he recently joined Taraf de Akácfa in 2020. Nowadays, in addition to performing with these bands, he regularly visits and records folk musicians in Romania and also teaches folk music. 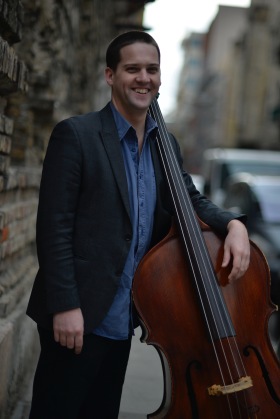 Ábel was born in Pécs, Hungary and was nine years old when he started to play the cello. Years later he switched to bass guitar, and at the age of sixteen he started to learn double bass. Ábel was the first musician in his family. He studied at the Pikéthy Musical High School, and after that he attended the Conservatorium Van Amsterdam for one year. In 2017 he graduated the Liszt Ferenc Academy of Music in Budapest, with a focus in Jazz Double Bass.  He joined Taraf de Akácfa in 2017, and he currently plays in other folk music, jazz, and world music bands based in Budapest, such as Söndörgö, Nagy Emma Quintet and Babcsán Projekt.

Johannes grew up in the middle of the forest in the south of Sweden. With both parents being musicians, he was exposed to different kinds of music at an early age. He started to learn the diatonic accordion from his grandfather at the age of eleven, he started playing the drum kit at age thirteen, and later the electric bass at age sixteen. At the age of nineteen he started to play the chromatic button accordion, learning the basics from his father, but since then he is mainly self-taught on the instrument. He applied to Skurup music school, but was not accepted and decided to leave Sweden to travel Europe and play music on the streets. He met with other like-minded musicians in Budapest, and was introduced to the music of the Balkans and Transylvania. Since then Johannes has taken part in many different musical projects and is at the moment playing with four different bands in Budapest. He has performed with well known artists like Tcha Limberger and recorded with Balogh Kálmán. Recently he received the Hagström award in Stockholm, an award given to young and talented accordion players. 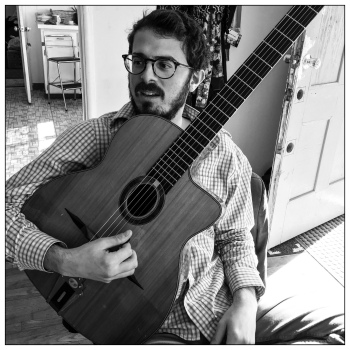 Isaac was born in the United States into a multicultural family with Jewish, Arabic and Eastern European roots from Latin America. Upon completing a masters degree in Mechanical Engineering six years ago, he immediately began hitchhiking across Asia and Europe for two years until he arrived in Budapest in 2015. He was captivated by the local folk music, and after meeting Lulu and Johannes, he started to play guitar with them in Taraf de Akácfa and settled in Budapest for the following two years. Since then, he has traveled extensively through the Balkans and Caucasus studying folk music and has been performing and touring locally and internationally with various music projects such as Taraf de Akácfa, Hét Hat Club, Dave Holodillof Balkan Projekt, Szkojani Charlatans, Laura Lackey’s Rhythm Revue and The Bitter Dose Combo.